Surface of the Earth consists of solid, brittle and moving tektonic plates. Totally there are 7 large and several tens of smaller tectonic plates on Earth. Moving tectonic plates interact among themselves, and on their boundaries the processes or orogeny, volcanism, magmatism and earthquakes are presented (Fig. 1). 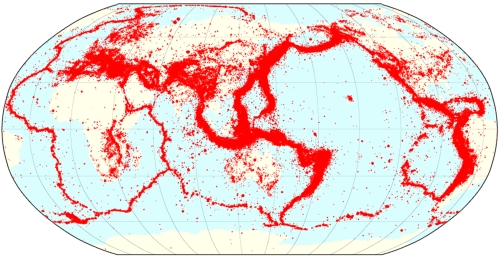 Due to interaction of the tectonic plates the tectonic stresses exceed the frictional forces in some places, thus, instant displacement between the plates might occur (Hook‘s law). Due to instant displacement large amount of energy turns into heat which results in rock melting, and only a small amount of energy (about 10-5) radiated as seismic (acoustic) waves; the process is called the earthquake. The earthquakes take place both on the boundaries of the tectonic plates and inside of them, because the tectonic stresses accumulate and can be transmitted at great distances (Fig. 1). Intraplate earthquakes usually take place in the zones of tectonic weakness, what is more, they are not so frequent as the tectonic stresses accumulate during longer period of time. All earthquakes might be severe and dangerous.
The earthquakes occur due to several reasons: movement of the tectonic plates, volcanic eruptions, glacial isostasy, meteorite impacts, large landslides and antropogenic activities (due to change of distribution of large masses, i.e. in the quarries or dams).
The most dangerous are the seismic waves which are generated during an earthquake and propagates from the seismic source (the propagation depends on focal mechanism and polarisation), thus, generating the vibration of the ground. The most dangerous for people are falling buildings which collapse due to hard ground vibrations. In the cases the source of the earthquakes lay beneath the sea-floor or ocean-floor the tsunamis can be generated which endanger the coastal areas, for example due to Mesina earthquake in 1908 the tsunami of 12 meters hight was generated, due to Sumatra earthquake in 2004 the coastal area of the Indian ocean have been sweped away, and tsunami generated in 2011 due to Tohoku earthquake damaged Fukushima NPP (Fig. 2).
The earthquakes are studied while registering, analysing seismic waves and their propagation in the Earth. There are several types of seismic waves. The seismic waves which propagate in the volume of the Earth are called body-waves, and surface waves propagate on the surface of the Earth. Depending on the polarisation of the movement of the ground particles the body-waves are devided into longitudinal or primary (denoted P), and transversal or secondary (denoted S), because the latter ones arrive later to the receiver. What is more, P and S waves experience refraction and reflection from the boundaries of the inner sheres of the Earth thus generating more phases of the seismic waves. The surface waves due to ground particle polarisation are devided into Reyleigh and Love waves.
Seismometers register the mechanical ground movements, thus, they record signals of seismic waves. The graphical expressions of the data registered by seismometers are called seismograms (Fig. 2).
The earthquakes are defined by various parameter, the most important such parameters are epicenter coordinates, hipocenter depth, magnitude, intensity distribution and focal mechanism. The earthquake mechanism is defined by moment tensor. According to epicenter distance the earthquakes are teleseismic (>3000 km), regional (700-3000 km) and local (<700 km) ones.
While studying the propagation of the seismic waves generated by the earthquakes, the scientists modeled the conmposition of the Earth, determined its major structures – liquid and solid cores, mantle and crust. The knowledge of the compositions of our planet enables hypethesis about conposition, evolution and environmental conditions of the other planets. The studies are carried on in order to assess more precisely the deep structure of the mantle and lithosphere of the Earth, and to analyse past and current processes. 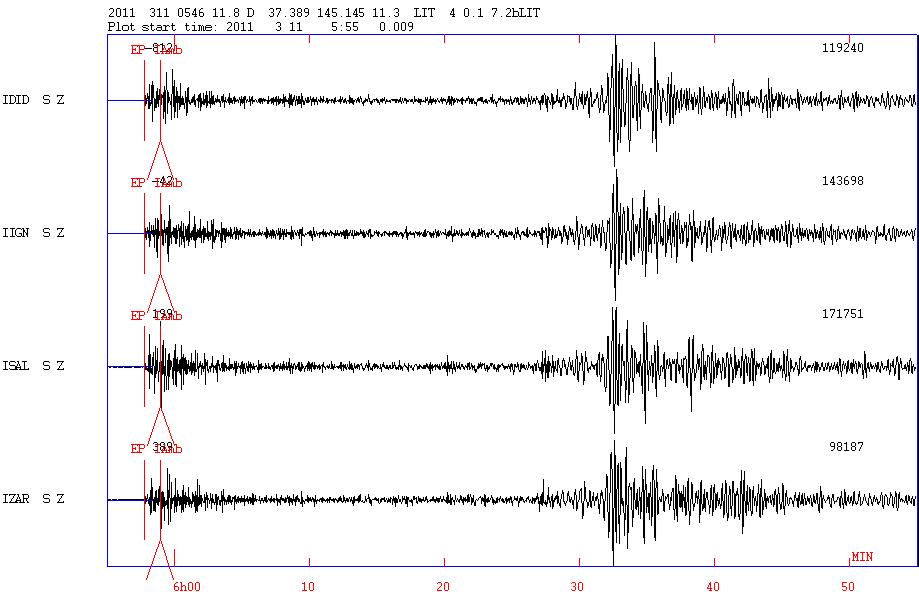 Fig. 2. Seismograms registered by Ignalina SMS seismic stations on earthquake in Japan on 11th of March 2011. The first package of the seismic waves consists of body-waves of various phases. After about half an hour the surface waves with higher amplitudes of the seismic signals reach the receivers. The moment magnitude of the earthquake was 9,0. During the period 20 days after the stike of the earthquake in the region there were recorded 47 aftershocks with magnitudes more than 6,0 and more than 800 weaker aftershocks.

SEISMICITY IN THE BALTIC STATES 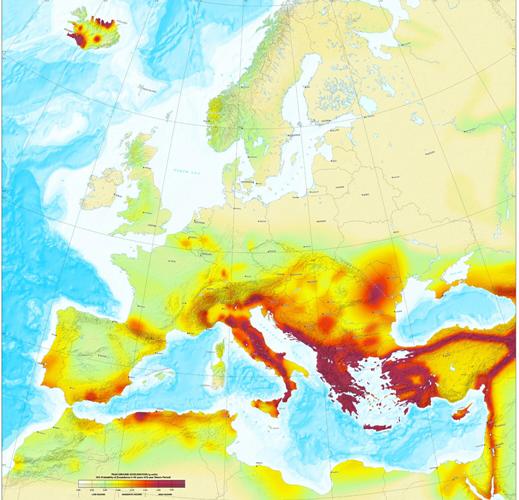 The territory of the Baltic States and adjacent areas are characterized by low seismic activity (Fig. 3) due to Precambrian Earth crust and large distances to the active seismic zones. The tectonic stresses in the region are governed by two major factors: 1) stresses from the Middle Ridge of the North Atlantics, and 2) isostatic processes from the last glaciation.
The most recent studies (Šliaupa et al., 2006) show NW-SE horizontal tectonic compression in West Lithuania and in East Lithuania the major axis of tectonic stresses are of NE-SW direction. Also neotectonic activities reported in the Kaliningrad Distric of Russia while studying deformations of the terraces of the Baltic Sea and anomalies of the river profiles. It was reported that amplitude of vertical movements of the crust during Holocene was up to 5 m. What is more, the GPS studies show 1-2 mm/m movements along the boundaries of the tectonic blocks.
The historical sources untill the middle of the 20th century provide information about seismic events, during macroseismic analysis the approximate magnitudes, intensities and epicentres of the earthquakes can be defined. Nowadays the signals of the earthquakes are recorded by seismometers, which enable to define the parameters of the earthquakes much more precisely. 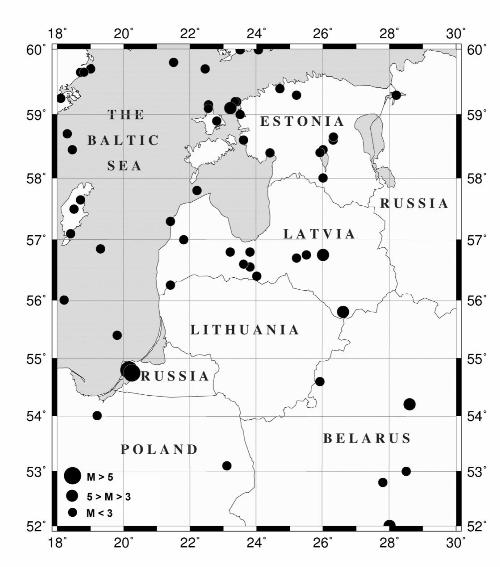 Fig. 4. Map of historical and instrumentally recorded earthquakes in the Baltic region since 1616. The circles of different sizes show epicentres of the earthquakes.

The Baltic region and adjacent areas are recognized as areas of low seismic activity, even though there have been registered several tens of moderate earthquakes (Avotinia et al., 1988; Boborikin et al., 1993) (Fig. 4.). Historical sources with descriptions of the seismic events goes back to the year 1616. In Latvia the magnitudes of seismic events do not exceed 4.4, and along the western coast of Estonia the earthquakes can reach magnitude up to 4.5. The earthquake of magnitude 4.4 on the 19th of December 1908 in Latvia was related to the Liepaja-Saldus fault zone, which was shown as neotectonically active area in the Šliaupa et al. (2006) studies. The poor data show lower seismic activity in the territory of Lithuania comparing to the adjacent areas. There have never been reliably recorded any seismic event in the territory of Lithuania. There have never been recorded any natural seismic events neither by Vilnius seismic station working period from 1970 to 1998, nor by seismic stations of Ignalina NPP seismological monitoring system. The known historical sources report on some moderate earthquakes near the territory of Lithuania, for example, in 1616 in Bauske, and in 1908 near Daugavlips (Latvia) and Gudogai (Belarus). In 1976 there was instrumentally recorded earthquake in the Eastern Baltic coast near Osmussare (Estonia) of M 4,7. The strongest instrumentally recorded earthquake took place in the Kaliningrad District of Russia on 21st of September 2004. The earthquake had three seismic shocks (Table 1), the magnitude of the main shock was 5.2 (other report M 4.6, and according to the Russian Academy of Sciences M 5.5), the hipocenter depth was about 15 km, and focal mechanism was right lateral stike-slip of NNW-SSE direction along the South Kaliningrad Fault (Pačėsa et al., 2005). The seismic waves from the Kaliningrad earthquake were fell in the entire Baltic region – the Baltic States, Belarus, Poland, Germany, Denmark, Norway, Sweden and Finland. The specialists of the LGT analyzed the macroseismic data of the earthquake and presented macroseismic maps (Fig. 5). 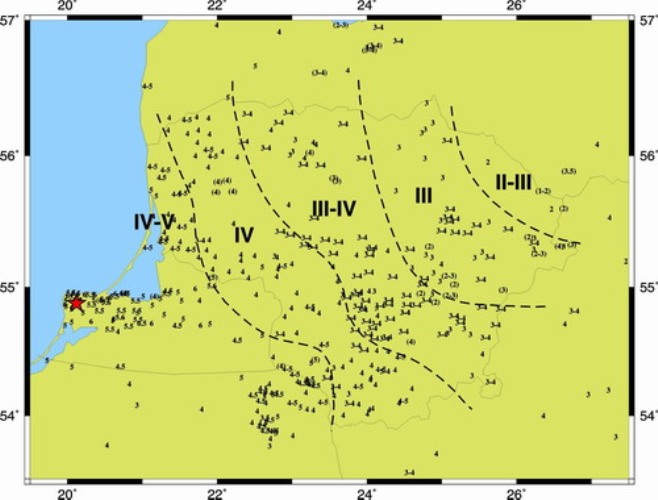 Fig. 5. Inftensity distribution (according to EMS-98 scale) of main shock of the Kaliningrad earthquake (Russia) on the 21st of September 2004 in the territory of Lithuania. Intensities denoted in roman numbers, the dashed lines separate zones of different intensities, and the red star indicates epicenter of the earthquake located by the Institute of the Geosciences Polish Academy of Science. Map compiled by A. Pačėsa, 2005.

In 2006 European Commission Joint Research Center announced Earthquake Mapping and Earthquake Data in New Member States and Candidate Countries, which reports low level of seismic risk in Estonia, Lithuania and Poland, and in Latvia earthquake risk is higher but non-priority one. In Lithuania the level of seismic risk for various social and infrastructural elements was assessed as low and very low. What is more, the LGT to the VATESI letter No. (8.3.17)-22.1-1036 on the 5th of December 2008 suggested the ground shaking from the earthquakes and (or) liquefaction of the soil to assess according to the International Macroseismic Scale MSK-64 and European Makroseismic Scale EMS-98, and suggested to set the value for the extreme events ≥5 in cities, and ≥7 in the rest part of the county, except at the territory of nuclear power plants where the value set ≥6.

We use cookies on our website. Some of them are essential for the operation of the site, while others help us to improve this site and the user experience (tracking cookies). You can decide for yourself whether you want to allow cookies or not. Please note that if you reject them, you may not be able to use all the functionalities of the site.